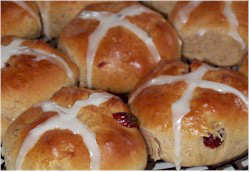 1. In a large mixing bowl, combine 2 cups flour, sugar, yeast, cinnamon and salt. In a saucepan, heat milk and butter to 120 degrees F-130 degrees F. Add to dry ingredients; beat just until moistened. Add eggs;beat until smooth. Stir in raisins and enough remaining flour to form a soft dough. Turn onto a floured surface; knead until smooth and elastic, about 6-8 minutes. Place in a bowl coated with nonstick cooking spray, turning once to coat top. Cover and let rise in a warm place until doubled, about 1 hour.

2. Punch dough down; turn onto a lightly floured surface. Divide into 18 pieces; shape each into a ball. Place in two 9-in. round baking pans coated with nonstick cooking spray. Using a sharp knife, cut a cross on top of each roll. Cover and let rise in a warm place until doubled, about 30 minutes.

3. Beat egg yolk and water; brush over buns. Bake at 375 degrees F for 18-22 minutes or until golden brown. Remove from pans to wire racks to cool. Combine icing ingredients; pipe crosses onto rolls.

In the book A Continual Feast the Author Evelyn Birge Vitz shares the traditions behind serving Hot Cross Buns on Good Friday.

"The Hot Cross Bun is the most famous, and probably the oldest, of the many English buns. Unlike today, when it is to be found throughout Lent, the Hot Cross Bun was originally eaten only on Good Friday. According to tradition, Father Rocliff, a monk and the cook of St. Alban's Abbey, in Hertfordshire, on Good Friday in 1361 gave to each poor person who came to the abbey one of these spiced buns marked with the sign of the cross, along with the usual bowl of soup. The custom was continued and soon spread throughout the country - though no other buns could compare, it was said, with Father Rocliff's. Hot Cross Buns became enormously popular in England in the eighteenth and nineteenth centuries. Street cries were commonly heard on Good Friday:"

If your daughters won't eat them,
Give them to your sons;
But if you have none of those little elves,
Then you must eat them all yourselves!
Posted by Jennie Shutt at 1:57 PM

Email ThisBlogThis!Share to TwitterShare to FacebookShare to Pinterest
Labels: Recipes