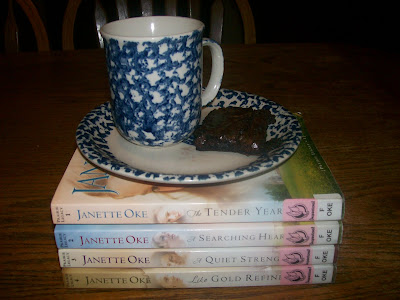 
A final series featuring the beloved characters from the Love Comes Softly Series. This series is about Virginia Simpson the granddaughter of Clark & Marty Davis.

Virginia has a rough time dealing with becoming a teenager and a troubled friendship. She felt her parents were too strict. She had a friend Jenny that frequently talked her into doing things that her parents would not allow her to do or without their permission. One of the main events in the book was a rafting trip with a stolen raft. Virginia did not have permission to go and it was during the winter thaw and unsafe to raft. Virginia and Jenny got into a fight and Virginia went home. After she left the kids went rafting and the boat overturned and they were injured, one of the boys died after being in Acoma for several weeks.

Jenny’s parents were divorced and her mother abandoned her to her dad and he did not treat her well. Virginia tried to maintain a friendship with Jenny even after she realized that it wasn’t a good friendship for her because she wanted to help Jenny come to Christ and to see the love of God.

In this book Virginia experienced disappointment when her boyfriend Jamison breaks up with her. Later in the story her friend Jenny gets into a car accident and is in coma and when she eventually wakes up and healed enough see is allowed to return home for further care. She eventually has to go back to the city hospital for physical therapy and falls in love and marries her therapist. Virginia’s sister has a second child and older brother gets married and she is disappointed that her life doesn’t seem to be moving anywhere. Virginia’s elderly neighbor dies and after several months the house is bought by an elderly woman whose grandson moves in several months later. He eventually buys a farm where he hopes to board horses and asks Virginia if he can court her.

Virginia is disappointed that marriage has not turned out the way she expected. He and Jonathan got married soon after he returned to from the west with the horses for his stable and plans to build a home. They could not take a honeymoon and did not experience a honeymoon period in their marriage because the house building and stable work keep Jonathan gone until bedtime. They like with Jonathan’s Grandmother Wither’s until their house was finished enough to move into that left Virginia feeling like she had no home to tend for her new husband along with no time to spend together.

A short time after they moved to their new home Jenny showed up with her now 3 year old daughter Mindy who she decided she no longer wanted and left in Virginia and Jonathan’s care. Virginia had a baby Martha as Grandmother Wither’s broke her leg and had to move in. Grandmother’s Wither’s sold her home and gave some of the money to Jonathan to help the family pay for their mortgage after a couple of hardship on the farm left them low on cash. Not long after Grandmother Wither’s was well enough she decided to more to a boarding house and several months later became seriously ill with a cold as was told she had a bad heart and moved in with the family again. Jonathan’s mother and nephew come to visit and after a week or so Virginia receive news that Jenny’s ex-husband has died in a car accident and wants Virginia to come visit her. After she is back a few weeks Grandmother Wither’s dies and Jonathan’s mother returns home. The nephew who is 16 years old stays to help with the horse farm. Virginia finds that she is expecting another baby.

Virginia is a very busy mother of 4 children including the child of her friend Jenny. In this book they struggle with how best to care for the now very elderly Clark & Marty Davis who does not want to leave there home. They try several arrangements but at the end of the book they are to finally move in with their youngest daughter Virginia’s mother.

Jenny shows up out of the blue after not hearing from her for probably 5 years. She finally confesses to Virginia that she has lung cancer and is going to die and abruptly tells her she is taking her daughter Mindy. They do not let her take her but a court battle ensues because Jenny’s ex-husband who died forgot to take her off the life insurance and she inherited some money. Virginia & Jonathan decide to let Mindy go live with Jenny because the child things that she can help her and bring her to Christ before her death. In the end Jenny’s asks for forgiveness of her sins before she dies. Jenny’s father takes Mindy back to live with Virginia and the family decides to find out how to get guardianship of her. After 2 weeks papers com in the mail saying that Jenny had given guardianship of Mindy to them after her death. Virginia finds she is pregnant with a 5th child. 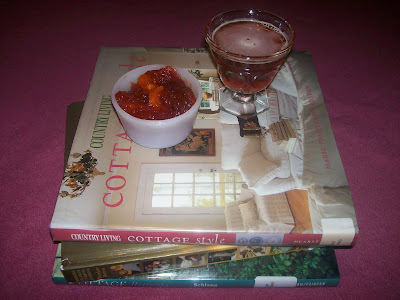 Recipe for the Pretty Gelatin Molds

Thank you for visiting A Welcoming Heart, grab a glass of tea and make yourself at home. Leave a comment or email me at awelcomingheart(at)gmail(dot)com
I am not saying this because I am in need, for I have learned to be content whatever the circumstances. Philippians 4:11