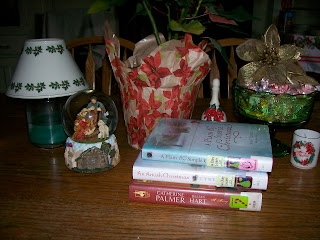 An Amish Christmas by Cynthia Keller

Meg and her family’s life are in ruins after her husband loses his job and makes bad investments. They lose everything they own but most of all Meg can’t trust her husband because he kept it a secret for months and only told her because they had a couple weeks before they had to find a place to live. As they are traveling to stay with her parents they get into a car accident and the Amish man whose buggy they almost hit takes them home with him. The family ends up staying several weeks with the Amish family during Christmas while their car is being repaired. Meg’s family is reluctant to participate in the going on in the Amish family and Meg is upset as to how selfish her kids are. As they all start to pitch in to help they find joy in the simple life. Meg finds she enjoys baking and the Amish family helps her to find a location and clients to start a bakery along with a place to live.

Anna Mae left the Amish faith to marry and English man and is shunned by her family. She and her husband are very much in love and are due to have their first baby in January. She wants to reunite with her family so that he child will know them. She contacts her sister in-law to help her plan for a Christmas visit.

When Anna Mae and her husband come to visit it doesn’t go so well with her sisters or her father but when they leave early to go home she goes into labor. Since they left during a snow storm and were angry the family becomes worried when they realize that she was probably in labor. He father and mother go to find them and find their car stuck in the snow. He husband had carried her to a barn to stay warm and give birth so that they didn’t get hit if someone didn’t see their car in enough time to stop. He tries to go for help when he find his in-laws and they take her back to their home to give birth. The family comes together and is reunited for Christmas 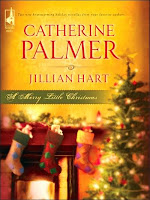 Unto Us A Child… by Catherine Palmer


Jeremiah reluctantly agrees to let a foreign exchange student stay in his guest house after his sons had already spoken to the administrator of the program Lara Crane. As the exchange student is moving in he realizes that it is a family and the couple has 3 small sons. He is not happy about the situation but as time goes by and he sees how much his sons have come to care for the family his heart softening to them also. He finds that he is attracted to Lara and volunteers to help repair a home for an elderly woman she is working on with a couple of other. They fall in love as she realizes that she shouldn’t discriminate against him because he has money. Money can buy some things such as medical care, and plane ticket in emergency situations. He realizes that she makes him a better person by helping him open his heart to others.

Colton sees Amanda and her children walking along the road in the bitter cold after their car breaks down. He picks them up and takes them home but finds he is attracted to Amanda but both are reluctant to get involved. She has two young Children and one is seriously ill with Cancer and they are not sure if she will make it to Christmas, and she was hurt when her husband ran out on her a couple years ago. He was hurt when a long relationship ended when he realized the woman was only interested in him because of his money and the lifestyle he could provide. He ends up helping to make it the best Christmas for her and the kids since it could be the last they all share together and they fall in love.