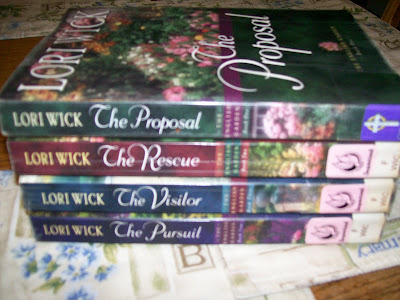 William Jennings is not interested in having a wife or family until he inherits 3 children from a distant cousin. He doesn’t know how to parents but eventually he learns as the cares for the children. He also comes to Christ as he spends time with the children and his sister’s family. He asks Marianne Walker his sister best friend to marry him. Marianne refuses thinking that he only wants her to mother the children and that it would be a loveless marriage but by the third time he asks she is convinced he loves her and says yes.

Anne Gardiner falls into the arms of a stranger and her father is has a head injury thinks they are having a relationship and forces them to marry. Anne goes home with Robert but he puts her to work cleaning his house because he believes that it was a trick. He eventually realizes the truth and feels sorry for her and wants to protect her. They both can’t stop thinking of each other and enjoying each other’s company and eventually fall in love.

Alexander Tate take is thrown from a horse and is left blind although he is praying for healing. His Aunt has Cassandra come and read to him and they enjoy visiting each other frequently. Cassie does not think that he would want her if he could see her because she is a red head and has freckles. They fall in love but Cassie runs to her sister’s home and Tate follows after he and she is convinced of his love and they marry.

Edward Steele is on his way home from Africa when he meets two men on his boat. The one is a servant to the other becomes ill and Edward helps them to get off the boat and find a place to stay. He discovers the other man is really a woman who is running from her mother in law who she fears is trying to kidnap he twin sons. He helps them for several weeks until the servant is well and then they go their separate ways. Eventually she moves to his area unknown to her and they meet again and he can’t believe how unmanly and pretty she is. He helps her to get her mother in law off of her back and they marry.