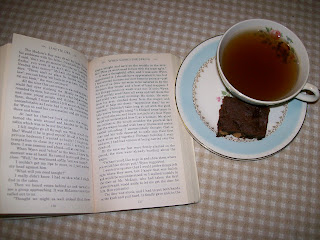 When Calls the Heart
Elizabeth is an educated easterner who moves to the north to teach school to a town who has never had a teacher for their new school and they kids have no education. She lives in the teacherage on the back of the school. She doesn’t have any plans to marry until she encounters Wynn a Royal Canadian Mountie who is not interested in taking a wife because of his job. They eventually work things out and marry.

When Comes the Spring

After Elizabeth and Wynn marry they move even farther north to a remote Indian Village. They struggle with their new responsibilities and loneliness. They experience a harsh winter and the general store’s fire that destroys all the supplies. The village has to pull together to keep everyone fed until supplies come in the spring.

When Breaks the Dawn


Elizabeth struggles with not having any children of her own but find joy when she is giving the chance to raise an Indian boy after his mother dies. She is trust into depression a year later when the father returns and wants the child back because he has found a new wife. She goes to visit her family for 3 weeks so that she can see a doctor since it has been 4 years of marriage with no children and is told that she is fine and there is no reason she can’t conceive. Sickness comes to the village and her best friend miscarries and her two year old dies.

Elizabeth and Wynn get a new post in a remote and more primitive Indian reservation. Elizabeth is not welcomed by the people who have had little contact with white people and no contact with a white woman. They shun her and she has to face a lonely winter alone. In the spring she plants her vegetable garden in an area the people think has evil spirits and when a fire comes to destroy the village they think it is because of her until they see that it comes to her garden and turns back. She is able to get them to care for themselves when they have no food or shelter for several months. She organizes them into camps and work groups to feed and shelter the community and gains respect of everyone including the chief. Because of the needs of the village they are transformed to a small town while the village is being built. The join a local church and help with the Sunday school. One of the boys ends up coming to live with them and they decide to not go back to the reservation because he needs them.

Beyond the Gathering Storm
The Delaney’s adopted son Henry becomes a RCMP just like his father. He is haunted by a young widow that he had to visit to tell of her husband’s death. He eventually find that the young widow lives in his town and he be friends her and her son. They end up falling in love.
Christine the Delaney’s adopted daughter moves to the city and falls in love with her boss’s son. He is pushy and not a Christian but she hopes he will come around. She is attracted to him against her better judgment and even after warning signs that he will not treat her well. She plans to marry him and soon after Christmas she realizes that she can’t be with him and breaks up with him and her boss lets her go so she moves back home.


Henry is planning to wed the young widow and Christine comes to town and help with the wedding details. She fills called to the North but because of the scars from her last love is she is not ready for a relationship when eligible young men are interested in her. Christine’s brother and his new wife get into a car accident as they are coming to a family Easter celebration. When they are in the hospital with serious injuries a kind young doctor befriends her. After several months goes buy he eventually calls her and asks her out on a date and then they start courting but she is not sure what to do about her feeling for him because she would have to give up on the dream of going to the North. She eventually decides on love and they plan to marry.