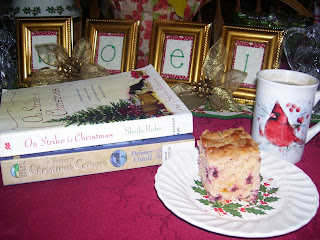 On Strike for Christmas by Sheila Roberts

Joy is fed up with her husband not wanting to participate and complaining about family get-together every Christmas season. It is her favorite part of the holidays and she does less of it during the year to accommodate him. Laura is tired of playing Martha Steward to her husband’s constant invited to their home during the holidays when he doesn’t lift a finger to help.
Joy decides she is going On Strike for Christmas and if her husband wants anything he has to do it himself. She tells her knitting club and Laura decides to do the same along with several others. Soon it is in the paper and their whole community is involved. It is hilarious all the adventures that they have. But it comes to an end when their friend has a recurrence of cancer and they find they want to help her and her husband who has been doing it all alone. In the end they all decide in the future to make Christmas a little simpler and everyone pitching in the help.

Under His Wings by Catherine Palmer

Lord William visits his Brackendale House and finds the only help is a kitchen maid named, Gwyneth. He ends up spending an enchanting evening with her talking. After the other house help returns he finds himself stopping to talk to her frequently and she is delighted by his company but some of the other help is jealous that she is getting attention and special treatment so she tried to detour him. They end up falling in love anyways as she is planning his big Christmas party.

Christmas Past by Debra White Smith

Madeline and Davis was childhood friend until one Christmas Eve when Davis kissed her. She was 16 and was not ready for such a relationship and he was heartbroken but knew he must not rush her and let her grow up a few more years. He tried to keep his distance but it hurt her very much especially when her grandfather died.

Madeline’s mother had raised her in her grandparent’s house after the death of her father. Soon after her grandfather died her mother decides to marry and move away. This cause hurt to the grandmother and she disowns her daughter but continues to financially support her granddaughter and have visits during the summer. Years later when her grandmother passes Madeline goes to her grandmother’s home to go through the possessions and she the house as her mother wishes. Davis and Madeline are still angry and hurt from their past but eventually as they work together they fall in love.

A Christmas Hope by Jeri Odell

Gabrielle is from a family that had been well to do but had lost their fortune and home. They moved to the other side of town were the elite society thought less of them. She had a boy that she liked named Jonathan that she thought she could eventually marry and provided for her finer tastes and she could moved back to the side of town that she was accustom. Her parents enjoy the new life they have made and feel closer to god and hope that Gabrielle will change her mind and find a nice boy to marry. They invite Nathaniel over for dinner because they hope to get their daughter and him together but she isn’t interested because she only sees him as a poor farmer. She does wonder how he could afford his own home and property and eventually comes to find out that his parents had been rich and cold toward him but after their death he inherited their money but decided to live a simple life. After spending time together they eventually fall in love.

The Beauty of the Season by Peggy Stoks

Rebecca who goes by the name Bell goes to stay with her favorite Aunt and Uncle to help care for her Aunt who hadn’t been well. But her Aunt and Uncle had motives to get the local vet and her together. They are both interested right away but she doesn’t think he would be interested because she has a large birth mark on her face. They become friends but she will not let it go any farther until he eventually gets her to realize that he is in love with her and doesn’t mind the birth mark.