I didn't really purge anything this month. I did collect the things that needed to be taken to someone or dropped off for donation. I visited my oldest daughter and dropped things off. I collected a few things that my younger daughter needed donated and I did it for her. My youngest son purged his bedroom and I dropped of 3 garbage bags for donation. I dropped off 2 sets of his old glasses and 1 set of lenses to the Lion's Club drop box at the eye doctors office. I dropped off a few computer things to my oldest son from my younger son. All things that needed removed from my home but belonged to my young adult children. I was happy to lighten the load. We are painting the living and family rooms along with refinishing the floors, so everything is being shifted around. Every room in the house is affected including the basement. Although we're rational minimalist we still have to have places to put 2 rooms and 2 closets worth of stuff. Thankfully, the house doesn't look to bad considering. We're using the exercise room as the living room for now.

I'm not counting any of the items because they didn't belong to me, although they did leave my home. I had previously counted the things going to my oldest daughters cause they did belong to me. I was suppose to drop them off in the fall and didn't get around to it.

My youngest sons donations. I forgot to take pictures of the other things. The back seat of my car and trunk were full. 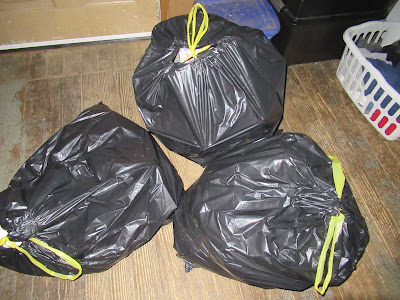